What a week! We made over each other from film glamour puss’s to stage characters from “Cats” the musical.

We all came out to play this week, between the different styles of make-up; our glamour make-up’s allowed us to play with eyelashes for the first time.

Our stage make-up was a chorus led by Lady Al Al Alice, with a brief visit from the dearly departed (but still very loud) Lucille Ball. 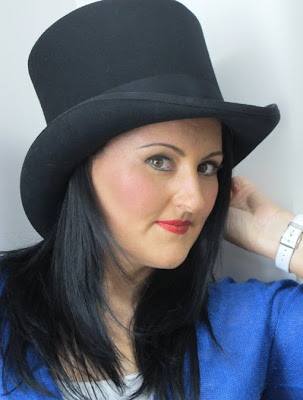 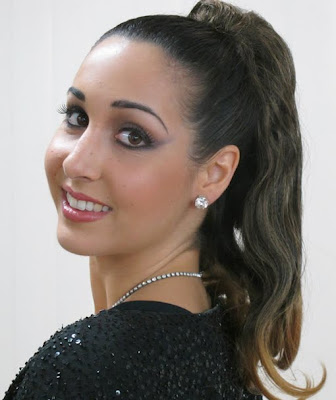 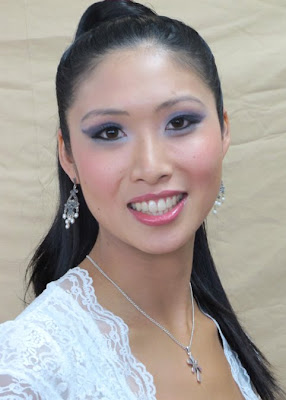 But our “Cats” characters were the highlight of the week! I believe Kristin was looking particularly wonderful as the cat “Exotica”, thanks to Jacinta’s beautiful blending, she must have had an interesting ride home on the train. I think the girls pulled this off in every sense of the word, if only we could sing and dance too! But we were trying hard to make our chosen character come alive under Louise’s expertise and all were purr purr perfectly wonderful. 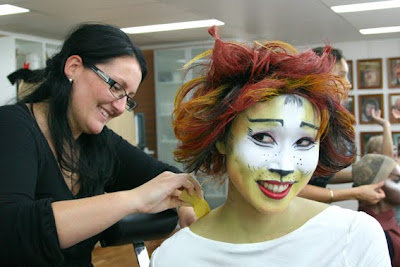 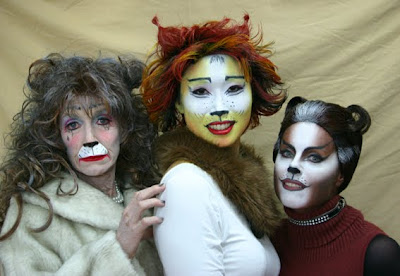 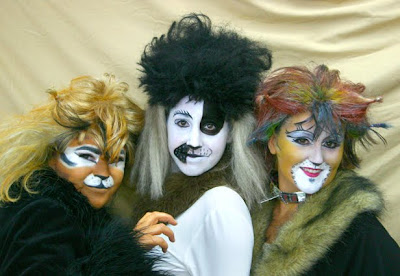 Continuing with our sculpts has become a labour of love for all six girls (so hard to tear ourselves away) watching a character come to life from paper to clay – a 3-dimensional form that will become our foam latex prosthetic character make-up.

Rae Hennessy - Student
Posted by MEG Effects at 2:36 AM

As the weeks have progressed, we’ve settled into the studio and honed our new found skills with all the practice we’ve been having, and have now moved onto the fun makeup. Yay!

Monday we each performed a character makeup and ended up with a full cast for “Days of Our Bold and the Beautiful at M.E.G”. A high class prostitute and a poor homeless person saved a 25year old mum of three from Western Sydney from a politician who was a serial killer by night, who was then taken for treatment with a stern matron, but then they all went to watch a live performance from a Diva that had come out of retirement. It was a fun day with lots of laughs. Everyone did such a great job.

Next we tried the hardest makeup to do, the “no makeup” look. It’s easy putting a full makeup on, but hard to keep it at such a minimal amount. As long as we got a good base and a few tricks from Louise, we did well.

Tanya revisited and got us to practice our hair washing and taught us blow-drying. It’s really tiring on the arms, and trying to get the co-ordination with the blow dryer in one hand and a brush in the other was frustrating.

Thursday was the most fun, we all needed to blow off some steam and get out of the classroom. Visiting the ABC studios and AFTRS (Australian Film Television and Radio School) and their makeup rooms, was good experience for what will be out there when we start working. Louise also took us to a few make-up shops and we stocked up on supplies and extras for our kits. You never know what you might need.

Alice Baueris - Student
Posted by MEG Effects at 1:51 AM

We started the week with an intensive examination of ‘lips- luscious lips’ by Louise! We completed a full make-up with special emphasis on defining shape and correcting lip lines. Out in the workshop our sculptures that we are creating to make prosthetic masks are taking shape.

We took a comprehensive look at the various types of foundations that can be used for stage, film and High Definition TV. We investigated different brands, colours, textures and discovered how to select certain shades to correct colour imbalances.

The afternoon saw us busy with the guest beauty therapist Liane, who outlined the different skin types and the products needed for their care and maintenance. It's obviously very important to understand the different skin types, skin textures and skin conditions. What goes on must come off!! So we then learnt the correct way to remove all our handy work.

The art of wig knotting was taught to us by Penny, a professional wig maker who showed us how to create our own facial hair-pieces such as moustaches, sideburns and eyebrows. It's quite tricky as each hair is individually knotted with a wig-knotting hook through a fine lace backing. 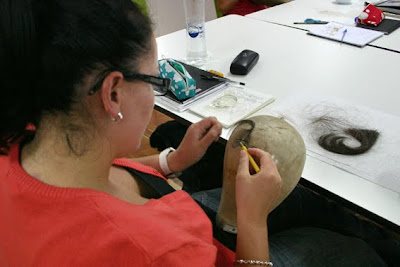 It has been an intensive and enjoyable week, full of new experiences!

Jacinta Christos - Student
Posted by MEG Effects at 2:34 AM