Make-up Continuity – or how to keep it all in check!

The students have studied a film script for 2 weeks, and this week they will work on bringing their characters to life.

After checking script breakdown and make-up charts, the students had to decide which character they would assign to each actor. Then they had to apply and complete the make-up for each character and use standby techniques, which included taking photos and using professional terminology to notify a crew of this intent by calling “Flash”. The photos of their work were printed and attached to the completed make-up charts.

The next exercise was to swap the make-up charts and each student had to recreate another person’s make-up work using the detailed charts and photos. They all found the task difficult at first but the overall results were very pleasing. The exercise was repeated with a new script, giving the students more experience with the Continuity process. 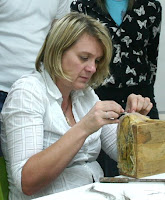 Also this week, Penny Clements taught the art of Wig Knotting and it was a whole new world. The students started the day by learning about the many different wig blocks there are to use. They also discovered that the lace used to make a wig varies in thickness and size depending on the different mediums you are working in e.g. film wig knotting is very different to theatre work. Penny showed the students the different ways to take head measurements. Next, they had to mix hair colours before they began knotting on the fine lace. Their first task a pair of eyebrows or a moustache to be used for a make-up.
Posted by MEG Effects at 4:21 PM